The term ‘painting’ seems to scare a lot of people. It sounds like you have to know what you’re doing… It conjures up the image of hours of irreversible hand painted craft work or overly complicated resprays with air brushes. Whilst I am going to be doing a tiny bit of respraying, it’s not complicated and the whole job doesn’t require a masters degree in art.

Using this Lima Rail Express Parcels van as an example, good results can be achieved purely by highlighting small features with some colour.

Here I’ve painted the hand brake wheel white, a small under frame box red and the door handles yellow. Nothing complicated, all you need is a very fine brush.

So that you’re not just painting parts of your coaches randomly and to give you a base to guide you, start by looking at photos of the real thing (or even at better quality models) online or in books. Above you can see the white hand brake wheel and yellow door handles on the Bachmann model. You can also highlight the grey buffers (plastic black on my model) and white lamp hooks with ease as I’ve done bellow. It’s all about bringing out these details.

First of all it’s worth mentioning that the Hornby Railroad LMS Coach, which has probably been knocking around since the early 90’s, is a very poor representation of the real thing. Straight off the back, the buffers are the wrong shape, there’s missing detail at the ends and the roof is the wrong colour. Many modellers also note that it’s too long, and ends up resembling a BR Mk I more than the LMS Stanier that it should depict.

These faults aside, the main problem with this model is that it looks cheap and a bit boring. There’s a whole lot of black plastic which distract from a fairly nice maroon livery application.

So in terms of detail to add, I’m going to be very subtle and focus exclusively on the black plastic under frame and ends. 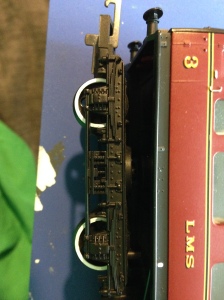 Firstly I really like the white trim on the wheels on the above Sleeper Car. Whilst not all stock featured this, it was common to see on many manufacturer’s coaches on the early part of the century. Instantly it attracts attention away from the rest of the under frame and adds another colour to the model. The only other things I’m going to do is add the route indicator lettering to the ends of the coaches and a few specks of white paint on the sides which seem to indicate where various pieces of equipment are. There are also some red panels, and signs on the real life variants above. These however may be modern additions so it’s up to you if you add them.

To address the roof, which in real life is grey not a shiny white-silver, I’ve bought a can of Humbrol Acrylic Matt Grey spray paint which I’ll use to apply a nice even coat.

It’s probably easier to pop the under frame base of the model off to do this. All you have to do is prize these catches inwards and the shell should just pop off. 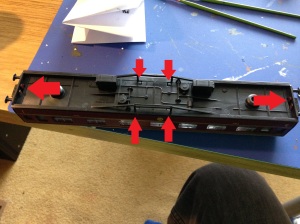 Sadly on this model, the roof is moulded to the body and you can’t remove it so you’ll have to mask the rest of the shell.

Follow the instructions on the can, working in a well ventilated area (preferably outside), trying to apply an even a coat as possible.

Leave to dry before pealing back the masking tape and putting the coach back together. After reassembly here’s what the new roof colour looks along side the old, and just for comparison a real life version too… 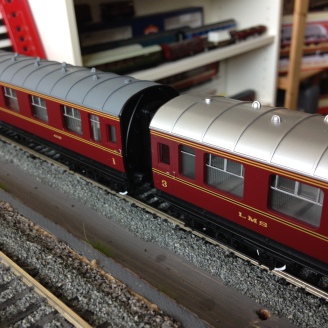 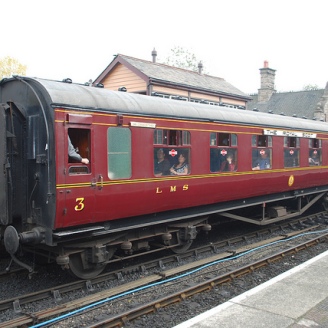 I hope you’ll agree the new grey is far more lifelike than the old shiny white-silver. Many modellers will recommend you do a primer coat first. This is certainly helpful if you’re doing a drastic change of livery – blue to red perhaps. Seeing as the colours were fairly similar to start with I didn’t bother with this. 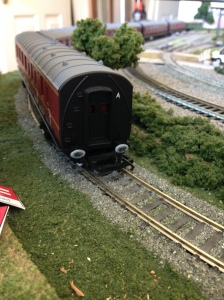 To finish the paint stage off I’ve coloured the buffers grey and added a light and rough layer of black to emulate grease and dirt. Even though in real life they probably would have been completely black anyway, I’ve done this to make them stand out from the rest of the moulded plastic end.

Tip: Why not add a tail lamp to the last coach in your rake to complete the look.

A short word on Weathering

I’ve deliberately avoided any talk of weathering. This is often what comes to mind when someone says ‘I’m going to paint my model to improve it.’ Whilst I do dabble in a bit weathering, as you may have seen in previous posts about signal gantries and bridge girders, I’m trying to make this project as simple and as novice friendly as possible. Remember I’m a novice in this process myself! Onwards to Part 2!

3 thoughts on “How To Improve Old Rolling Stock: Part 1 – Painting”