A friend of mine recently spotted this on sale at Beaulieu and, seeing as the extension to my OO Gauge Layout is based loosely on the Croxley Green branch, I simply had to have it!

It is thought that this sign originated from Watford Junction in the late 1980’s and under BR’s Network SouthEast brand (another reason why I had to get my hands on it!). It shows the busy commuter route now ran by London Overground to Euston as well as the declining Croxley Green branch. But most interesting of all it shows a relatively short lived service to Liverpool Street via the North London Line.

After Broad Street station was closed in 1986, trains from Watford Junction were diverted onto the Great Eastern line at Hackney and onto Liverpool Street via London Fields. This quirk meant that for 6 years a service running out of Liverpool Street actually ended up on the West Coast Main Line.

The service was slow and unpopular and was being gradually run down by BR. By 1990 only 4 trains a day operated between Watford and Liverpool Street. In 1992 the service was withdrawn all together along with the closure of Primrose Hill which by this point was only being served by one train in each direction a day.

It’s at this stage that the sign is likely to have been removed from Watford Junction, although the service to Croxley Green continued until 1996.

Interestingly another copy of this sign exists and is apparently residing in a pub in Stockholm, Sweden! According to the post, the sign bellow could have spent some time in The Head Of Steam pub in Euston. 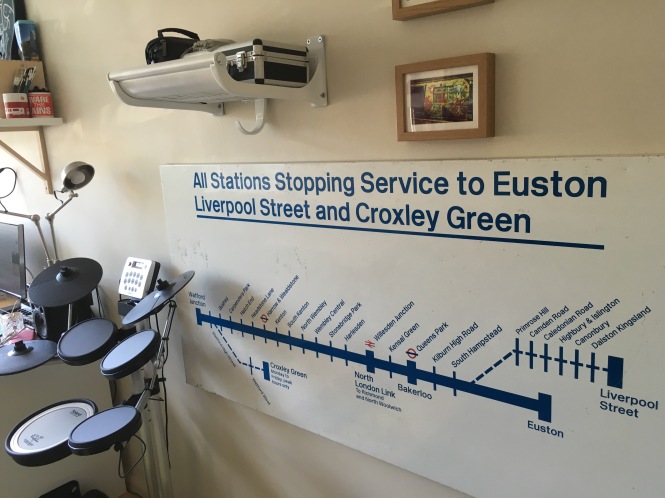 If you have any pictures of this sign at Watford Junction or any other info regarding it’s history, do get in touch. 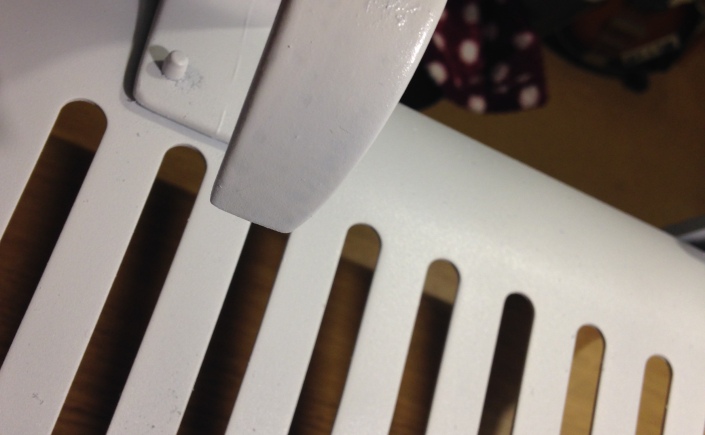 Last weekend I found myself down at the TfL Museum Depot Open Day at Acton Town. This is, for those not in the know, the ‘store cupboard’ for everything TfL doesn’t have on display at their flagship museum outlet in Covent Garden. It houses everything from rolling stock to enamel signs, from signals to station plans. One day it’ll be worthy of it’s own post but needless to say it’s a treasure trove for transport geeks like me, and it’s full of all manner of odds, ends, tidbits, miscellany and whatnot. 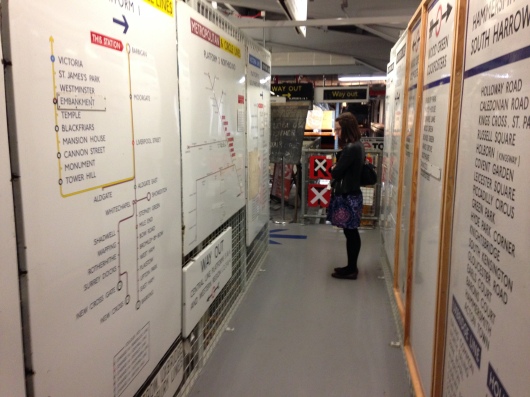 With each passing year, obviously wising up to the popularity of these events, TfL haul over more and more of the stock on offer at the Covent Garden/Online shop and it’s a good time to pick up a bargain. It’s also one of the few instances you’ll be able to get your hand on something a bit more special on the cheap! They’ve always had a few bits of paraphernalia on offer, mainly old enamel signs (at very reasonable prices by the way) but something more intriguing had caught my eye… 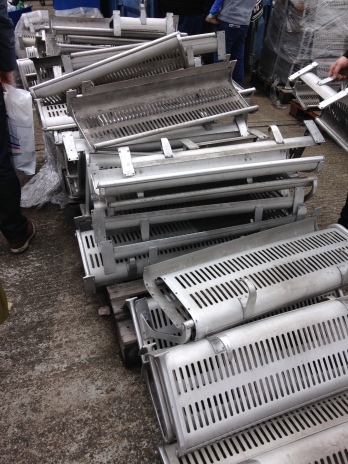 This pile of rubble may look like scrap metal to the untrained eye, but even most Londoner’s will be able to tell you these are luggage racks. Luggage racks that used to belong in one of these… 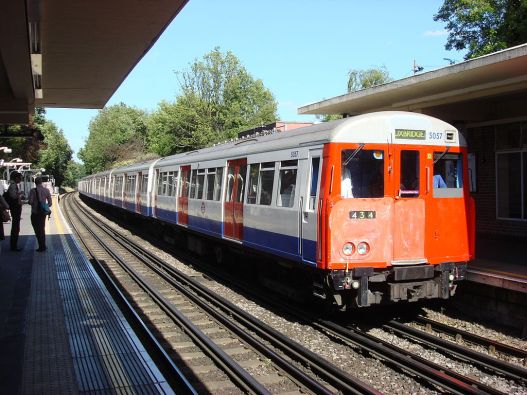 An A60/62 stock train that for 50 years slaved away on the Metropolitan Line. In fact here’s how those luggage racks would have once looked… 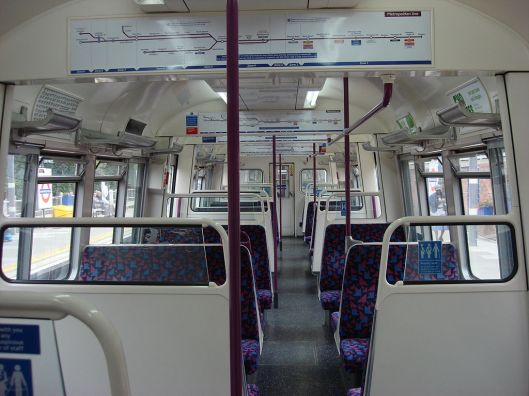 A60 interior (Image by Oxyman)

They were one of the few, if not the only (and certainly the last), tube stock to be fitted with luggage racks*.

TfL had already worked out it could cash in on the decommissioning of old stock, and these luggage racks have been on sale through their website and in the Covent Garden shop for the best part of two years. As you’ll see though, the asking price for even the small ones (pictured centre right) is not to be taken lightly! They also would pre-clean and spray paint them for you in a tube line colour of your choosing if you want to pay north of £100. Despite the price, I always had my eye on one but never got round to taking the hit. Eventually the supply of luggage racks from dismantled A60’s ran dry before I could snap one up.

Until I stumble upon that pile of metal at the Open Day! More exciting still, they were being sold off far lower than their original asking price! I picked up one of the small luggage racks for just 30 quid. They were also selling painted versions for £75, but couldn’t quite justify the extra expense when I could probably improve it’s fortunes on my own. 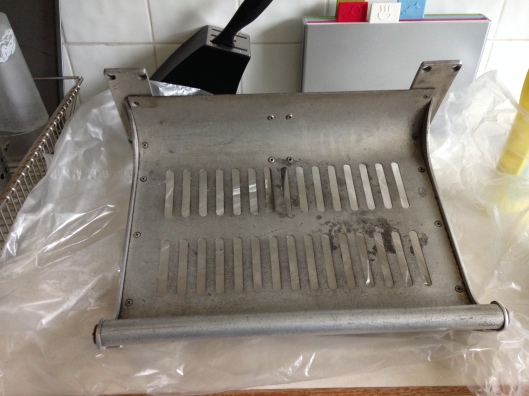 Now, I don’t know if the racks they sold ‘RAW’ through the website would have came this grubby… But you’d be forgiven for thinking the one I picked out (above) had still been in use and unscrewed just yesterday! In fact it was actually one of the cleaner, less dented specimens on offer! 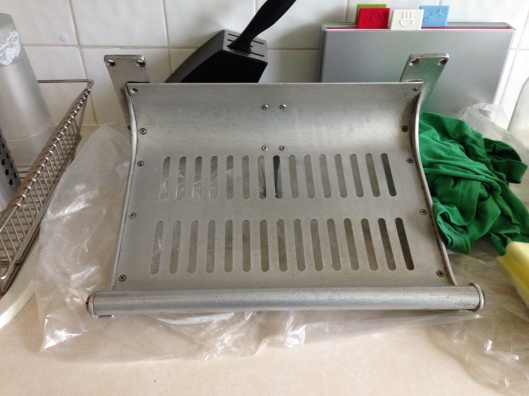 I thought I’d need some industrial strength cleaner, but this is how the rack looked after washing up liquid, hot water and elbow grease. I then went onto use a spot of Ciff between the joins to remove any stubborn bits of muck.

Having seen how good they looked sprayed, I’ve decided to go ahead and paint mine myself. 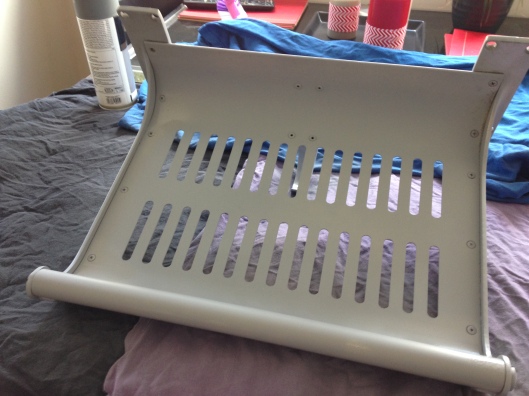 This is how it looked after one coat of grey primer. Already looking smarter! 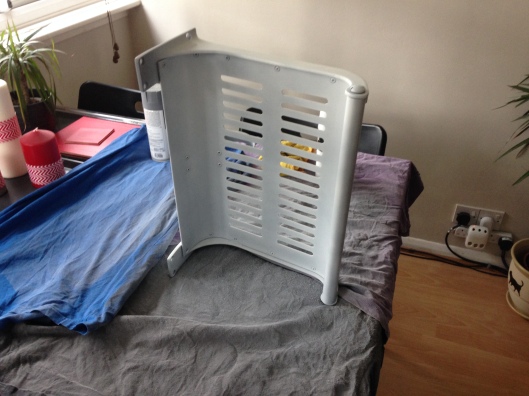 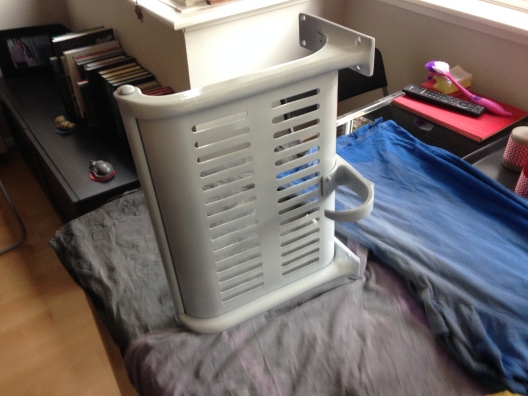 …Although the light doesn’t show it well, this is after the 1st top coat of Gloss White. 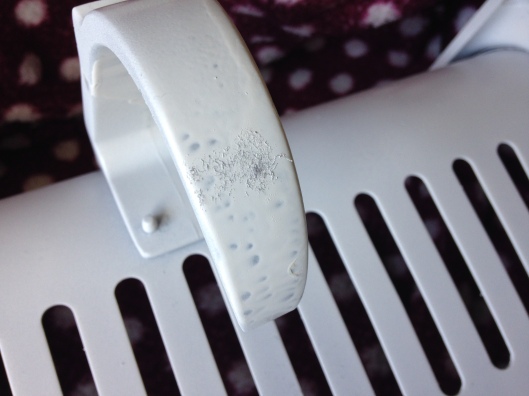 Incidentally if this occurs during any spraying work you’re doing, like it did for me, it’s due to particles of silicon getting stuck on the surface which the paint then refuses to adhere to no matter how much you apply. 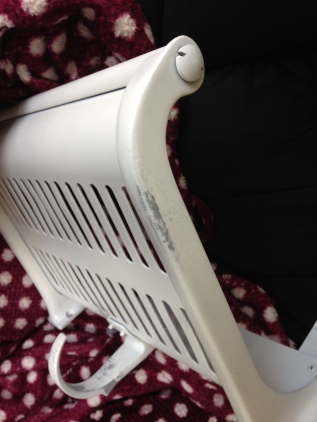 I used watered down paint thinners to lightly strip back the offending areas (above). I’m told Lighter Fluid or Vodka will also do the trick.  Be careful not to be too vigorous in your rubbing, you don’t want to take off the primer coat. Use a tissue rather than a a fabric cloth for best results. 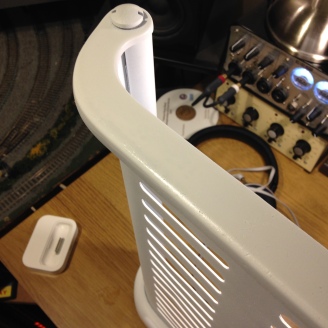 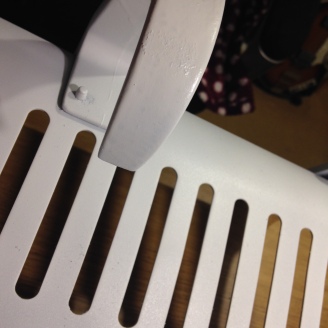 Much better! Now time to attach to the wall! 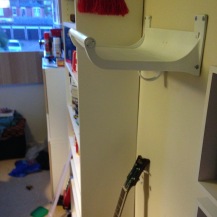 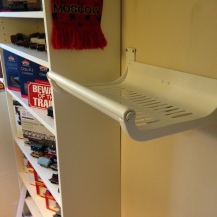 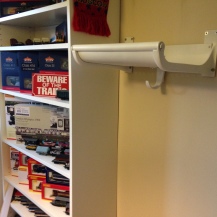 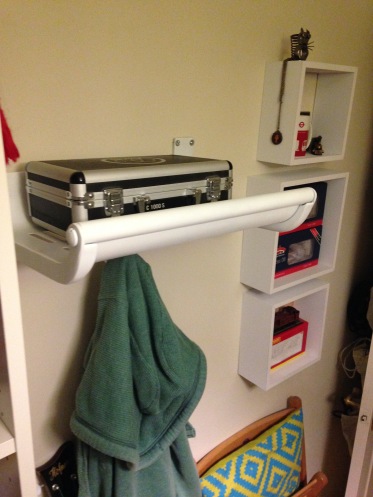 *This is down to the fact the Metropolitan Line (in it’s form since when the stock was introduced in 1960) predominantly caters for long-distance suburban commuters. Unlike other lines it was assumed passengers would be on the train for a long period of time, so they were kitted out more akin to mainline coaches – hence the luggage racks. This also explained the rather generously comfortable seating arrangement, when such a thing was still acknowledged as a priority over capacity!