The Mainline as of August 2013

I promised myself that once I moved into my new flat I would in someway look at expanding my layout, now known as ‘The Mainline’ for sake of giving it a fancy title for this new site.

Possible areas to expand into marked in yellow

Now, I’ve not got acres of extra space to work with: Either side on the left and right there is perhaps 10-12 inches of spare room between base board and wall. Nonetheless I think it’s just about enough to think about an expansion in some way.

First idea is to separate the two boards, move them both into the yellow zones and insert a new board in the middle where the red line is. You may remember that my original design factored in this potential method for expansion.

No major track work will need to be done, it’s just a case of adding another straight to each oval. It will be slightly fiddly to plug the scenic gap but nothing too difficult. The major problem with this plan is the two speaker stands at the back of the room. Currently the baseboard nestles snugly in between them both and are flush against the back wall maximising space. If I were to separate the two boards to add a new piece I’d either have to move the speaker stands completely, or, bring the entire layout forward (and off the back wall) to accommodate the expansion. I don’t like the sound of either of those two plans.

Option 2: Expand on the left hand side only.

Second idea is to expand in one direction only. In this scenario a terminus station or yard could be considered for scenic and operational interest. I’ll be honest, this was my preferred idea for quite sometime… I’ve since discovered that I much prefer sitting back at my desk (where these pictures are all taken from) simply enjoying running various trains. I’ve found I’m much more likely to do this rather than sit at the layout itself and make lots of complex operational changes… after all, that’s what Salford Chapel is for… The Mainline has become much more an outlet for running trains whereas Salford Chapel is becoming the more detailed ‘model.’ Therefore, maximising the number of trains I can run would be priority in this expansion project. The station or yard option above would allow me to switch stock around however I’d definitely have to look at motorising points so I’m not constantly leaning over the entire layout all the time. (I’ll admit this gets a bit irritating). 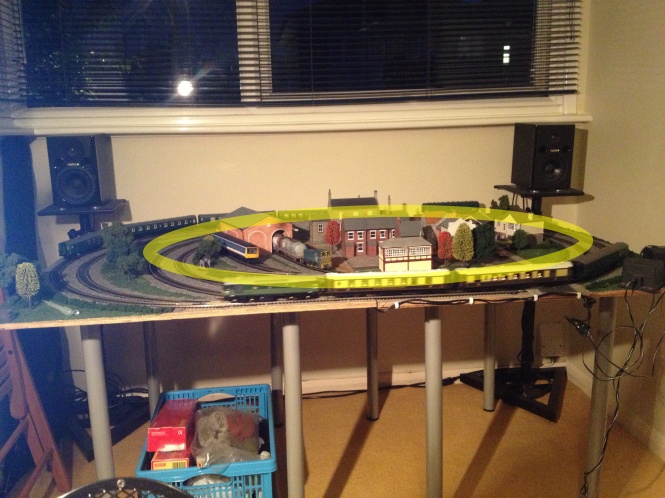 Option 3 is a bit… out there… Build a completely new oval, elevating it above the rest of the layout. I really like the idea of adding height and it’ll mean I’ll be able to run a 3rd train at any one time, but logistically I really don’t know where to begin in making it a reality. Far too complicated. 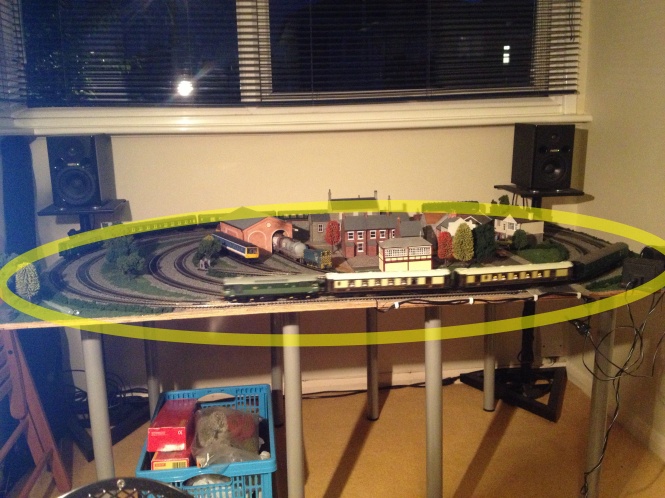 Same as Option 3, but less wacky. There’s a relatively unused siding at the back of the layout. I could essentially develop this into another full outer oval, expanding in all directions but hopefully in such a way that I won’t have to move the speakers or take up too much room at the front of the layout. Now we’re talking!… 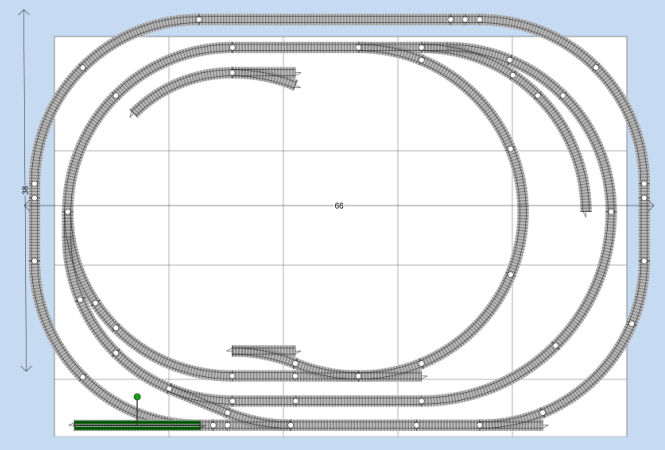 Ignore the fact there’s some track missing from the above layout on the inner ovals, this is because the free version of the AnyRail5 software I’ve used only allows 50 pieces at any one time. The green piece of track at the bottom will need to be lifted to make way for the outer oval curve. Overall the layout will expand only 3 inches at the sides and 3 inches at the front, but will allow the operation (and interest) of running a 3rd train.

Now I could add braces to the underside of the original baseboard to support a 3 inch strip of wood all the around the layout. However, I thought it would be far easier to buy completely new boards, slightly wider than the old ones, to accommodate both the new oval AND the old boards themselves… 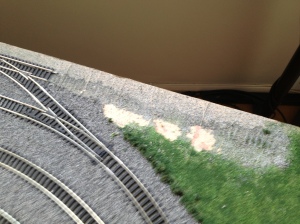 First job was removing the redundant siding at the back of the layout. Old ballast was chiseled off and the section of track lifted. I’m not worried it left a bit of a mess, I’ll model over this in good time. 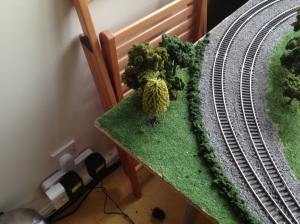 Corners of the board were sawn off to make way for the outer oval. 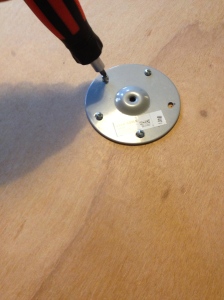 Legs and leg plates were removed from the old board and added to the new ones. See Episode 17 for this process!

The old boards were then laid on the new ones now clearly showing where the outer oval will eventually go. It’s worth noting that they are still in two parts – to enable dismantlability, and still leave room for the speakers to remain in place at the back of the room. There’s also a height difference between old and new which will add some much needed depth to the layout. Gentle gradients will rise and fall from the old siding at the back of the old boards to accommodate this.

I’ll be off to ebay now to get some more track! Stay tuned for results soon.

Leave a Reply to The Mainline: The Story So Far | Calling All Stations Cancel reply