So this is where we are up to. The new outer loop is fully operational, albeit with some scenery still to be completed. The layout now has capacity to run 3 trains and is controllable from my desk. 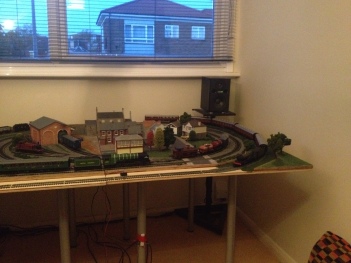 It has long been my intention to add in some ‘height interest.’ Let me explain… If I was going to start again from scratch I’d hide half the layout behind some scenery, a wall or hill perhaps. Trains would disappear behind such a wall and reappear elsewhere which would look visually more realistic than being able to see the full oval. This after all is how many modellers design their layouts.

So why didn’t I do that? Firstly, I didn’t really think about it. Which is a shame, because being able to see the full oval all the time sort of bugs me because it’s less realistic. BUT we’ll get to that shortly… Secondly (and this makes up for my previous lack of vision), I really need access to the full layout. This is because space is at a premium and the rear of the layout is quite hard to get to as it is. If it were hidden behind, or even under, scenery it would be hard for me to carry out maintenance and various operational manoeuvres (junctions and points exist at the back of the layout).

But all is not lost… If I build upwards, predominantly in the centre of the layout (the town scene) this will act to hide the rear of the layout without reducing access. And this is what I mean by adding ‘height interest.’

Now, I’ve already done quite well with the town scene – there are plenty of buildings and trees getting in the way of the sight line, however it’s been my intention to go further.

A bridge. A bridge would add realism, provide more suitable road access to the town (to replace or supplement the level crossing now partially cut off by the new outer loop), and most importantly block the sight line to the rear of the layout. 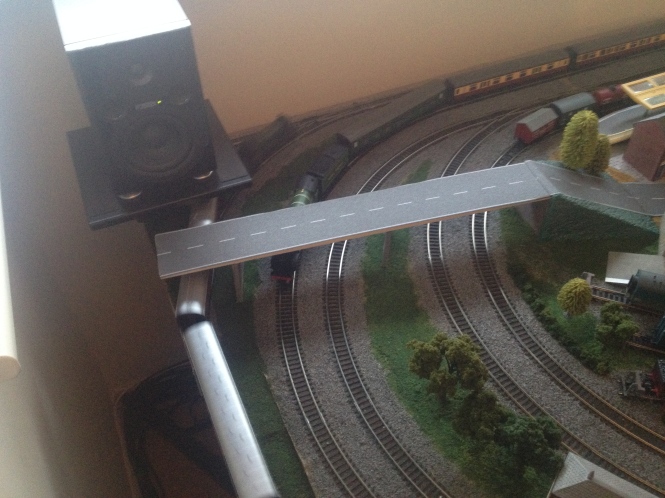 So this is where the bridge is going. I’ve used some very cheap strip wood cut to form pillars and a roadway and glued straight down to the baseboard. (All very similar to Salford Chapel‘s arrangement). 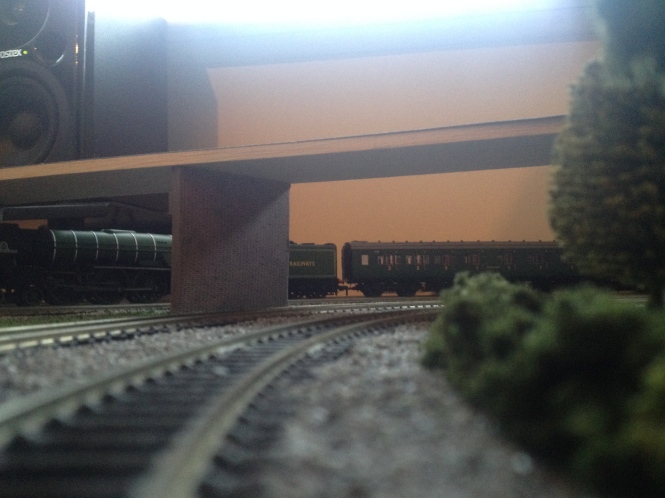 And similar to Salford Chapel I’ve stuck a printed brick patten to the pillars. 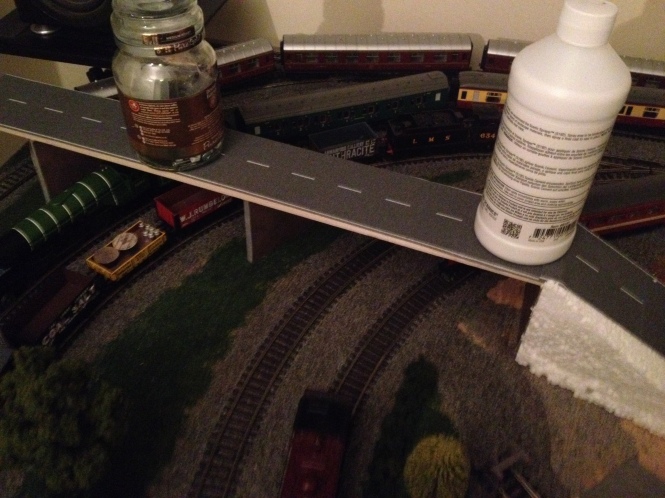 Everything was weighed down to help the glue set.

The embankment was created by cutting up polystyrene (a messy business!)… 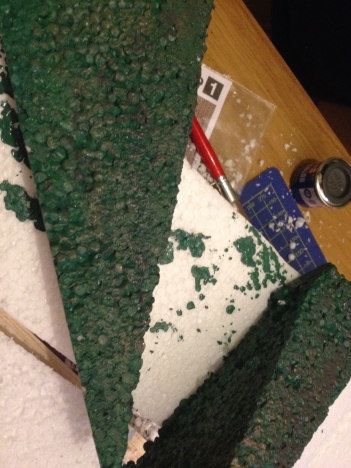 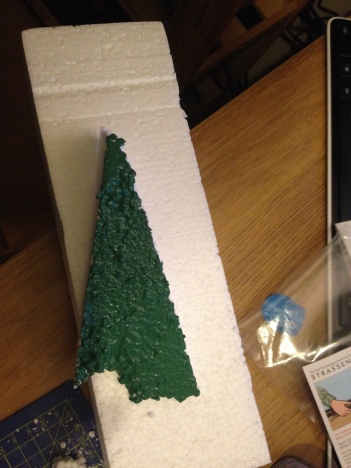 …and sticking down with PVA. Eventually I will also cover with the same scenic scatter I’ve used elsewhere on the layout. The texture of the polystyrene will lend itself to a rocky affect, so painting it grey would have also been an option. 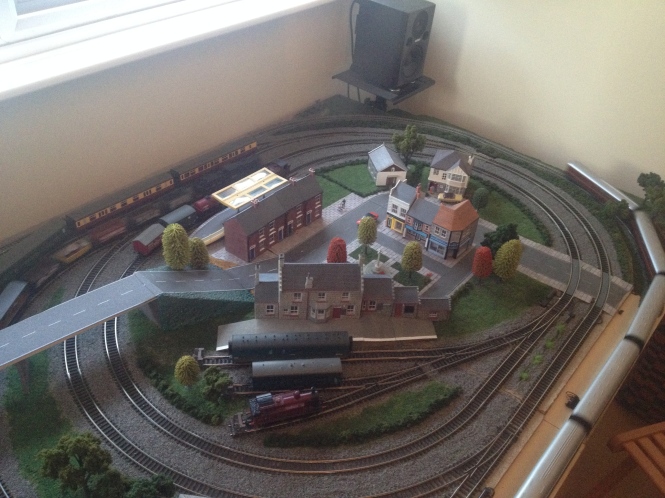 To accommodate the new road bridge I’ve had to make some changes to the arrangement of the town scene. 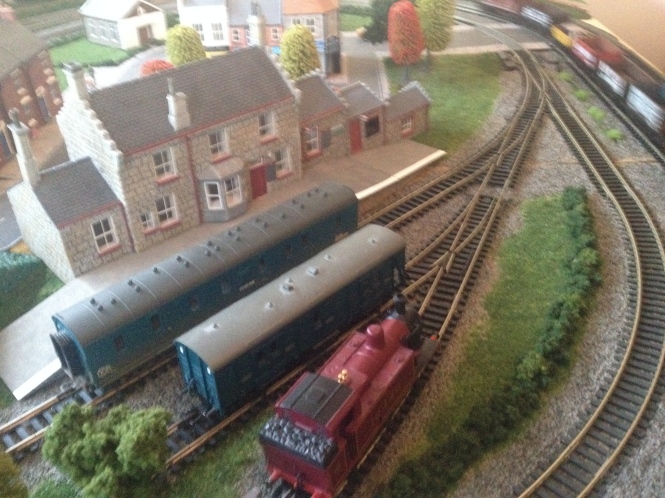 The train shed was removed to make way for the embankment (sold off on eBay) and the station and sidings relocated and realigned in it’s place. This also now gives a better focus to the NYMR Goathland Station* replica, which prior to the move had been facing the wrong way at the rear of the board.

*Which you may recognise as Aidensfield from Heartbeat or Hogsmead from Harry Potter.

The rows of Manchester style terraced housing have been demolished to make way for a town square and memorial. The shops have also been turned around to face the square…

…the housing now exists in one single terrace with a 2nd station used from old spare Hornby parts where the larger station used to sit. 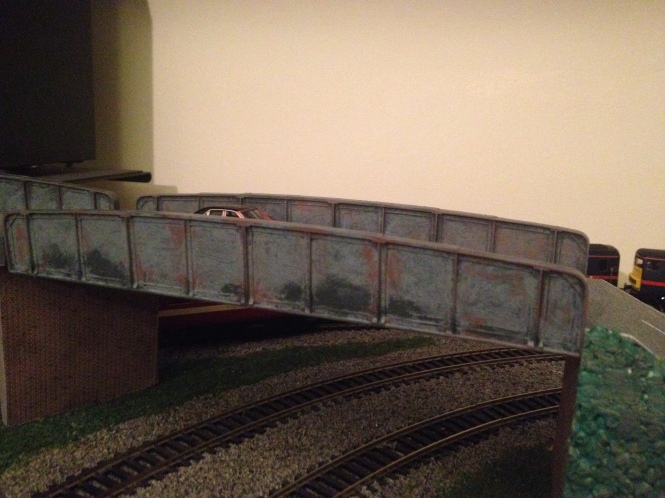 Finally I’ve added some plate girders to the bridge which I’ve weathered myself. (Similar to those I have on Salford Chapel… which I should really get around to taking some pictures of!).

The bridge now fit for traffic. 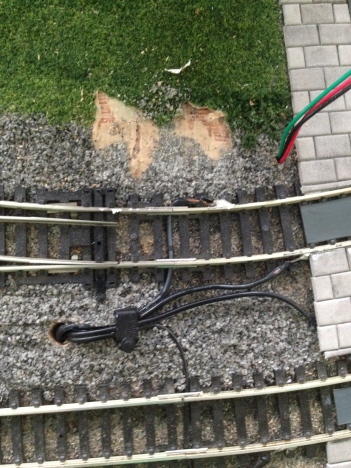 They’re not wired up yet but they will eventually also be controllable from my desk.