Mark Mason, in his book Walk The Lines which I have recently be acquainting myself with, introduces a concept that every Londoner has a ‘personal tube line.’ That’s not just the line you live or work on, but more a fictitious line that would run through all the stations that have some personal meaning to you. It wouldn’t be geographically very useful, or even logical, but it would connect up all the points in London that you find significant or have influenced your life in someway.

I suppose my ‘personal tube line’ at the end of this challenge would by virtue mean it includes every station, but that just seems greedy, so for the sake of this thought experiment let’s ignore it.

Now I know after all of this you’re expecting Great Portland Street, visited all the way back in April, to have some grand emotional significance to me, but I must admit you’re probably going to be disappointing with the punchline. Hopefully however it will go someway to explain what Mark meant – some stations just start to get associated with common events, feelings, or activities.

Sitting in the middle of a traffic island at the top of it’s namesake at the junction with Euston Road, Great Portland Street is not the busiest of Central London stations. Below ground the platforms are lit with warm and inviting yellow lights which complement the soot stained girders and brickwork making you feel like you’re in a trendy whisky bar somewhere in Manhattan. This should be my ‘backup station’ (we all have one…), it being the 2nd closest stop to where I work. However it doesn’t really start to feature in feasible backup routes until both the Central and Victoria lines are broken, which *touches wood* happens infrequently. No, Great Portland Street holds significance to me for being a few doors up from the branch of Nandos I often (…OK, very often…) visit after work. Once laden with much chicken and spice, I’m too lazy to walk back to Oxford Circus (002) (even though this is probably a quicker route home), opting instead to take an S-Stock round to Liverpool Street (076)*. This has rather wonderfully meant that I associate Great Portland Street with chicken. I told you it wasn’t a great punch line. 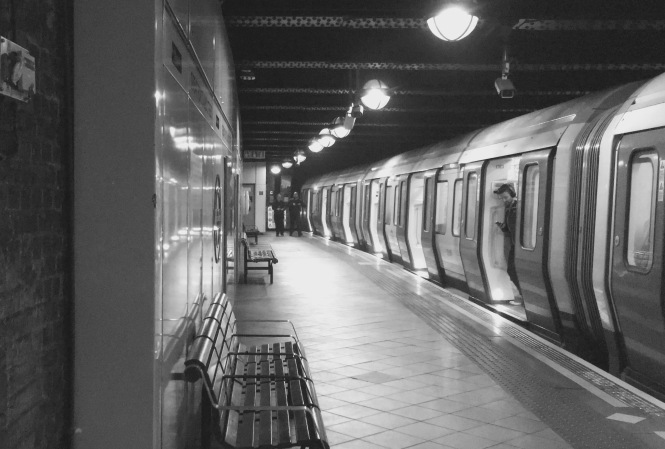