The first thing to bare in mind when building any layout on a budget, or any layout whatsoever for that matter, is creating a plan and sticking to it. Cost can quite easily get out of hand if you are easily distracted by new and diverse rolling stock or constantly changing layout designs. I certainly found this with my first layout, it’s great giving yourself flexibility to run “whatever you like” but the lack of focus meant I never got round to completing rakes of coaches or sets of locomotives.

Network SouthEast will set you firmly between 1986 and 1994, so the restricted era will help give you some focus. Despite only being operational for 8 years NSE still had incredible diversity in it’s rolling stock, operations and reach. You therefore might want to further narrow down what part of the Network SouthEast operation you’re going to model.

Will it be part of the sprawling Southern Electric region? If so will it be a commuter branch line in the capital or a boat/dock yard scene in Portsmouth? Then there’s the possibility of the Essex AC lines running out of Liverpool Street and Lea Valley or the then new Thameslink brand. If diesel’s more your thing then you could look at the commuter belt around Paddington and Marylebone or even some far flung destinations such as Yeovil and Exeter. 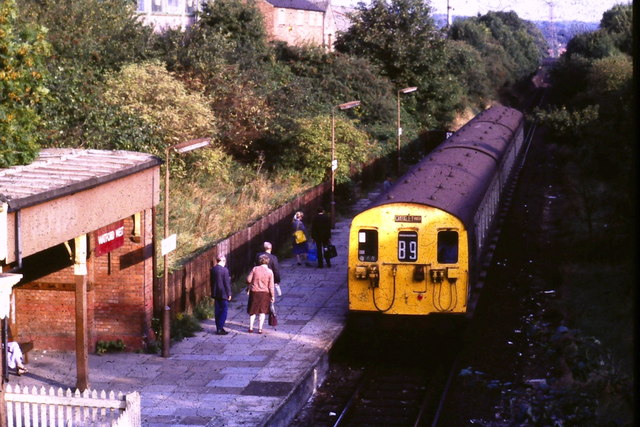 Watford West a year before NSE launched. A station in it’s simplest form

I would certainly base my layout losly on an actual location even if I’m not modelling an exact replica, this will give you something to work towards. It will also help control what rolling stock you buy (a perennial problem for the distracted modeller like myself). If you’re modelling the Great Western Main Line like Everard Junction for example then there’s no need to be buying Bachmann’s 3rd rail stock… There’s also nothing wrong with picking two or three pieces of rolling stock and designing the layout solely around them. Research some areas, look at some archive footage and images – What rolling stock ran through these stations? What was the service pattern? What did it look like?

If you’re trying to build a layout on a budget don’t let size run away with you. You might like me be restricted on space anyway, but see if you can use this to your advantage. Stations, though attractive, can often consume needless amounts of space. A good way of getting round this is modelling just a part of a bigger station or perhaps a more specific part of railway infrastructure like a TMD, carriage maintenance sheds or a freight yard. You can still have access to the same interesting array of passenger rolling stock but not having to save space for platforms and large (possible expensive) buildings might be a bonus.

Isle of Wight – Too Niche? Image By Metromodels

It’s also worth baring in mind that British Rail was still rationalising large parts of it’s network. Lots of station furniture and infrastructure was slowly being removed in favour of simple bus-shelter style waiting areas. This was certainly most prevalent on the lesser used branch lines (just look at Croxley Green for the ultimate station diet!). You could use this to your advantage by modelling the transition and minimal look some of these stations ended up with. This doesn’t mean your layout won’t be detailed, you can just spend more time on the scenery – quiet a lot of NSE was still quite run down and, in parts, overgrown!

Off the shelf versus custom built?

There is no shortage of Network SouthEast rolling stock available from the major manufacturers. The trouble is they know that that toothpaste livery is very desirable and have a habit of pricing it accordingly. Don’t forget though that Network SouthEast didn’t paint everything overnight. There was still vast quantities of BR Blue/Grey coaching stock operating in this era and these are often easier and cheaper to get hold of. Many Blue/Grey coaches continued operating well into the 90’s with nothing but a few transfers on them to identify them as NSE. You can do the same by adding water applicated transfers without breaking the bank.

Adapting non-NSE buildings and structures is also fairly easy too. Canopy pillars, signs, benches, fences all suddenly look the part with a lick of red paint.

How would you do NSE on a budget? Why not leave a comment bellow.

One thought on “Building NSE On A Budget”