“as a company we continue to meet new challenges. Our parent company, Kader Industries, has faced a major reorganisation which involved transferring plant and production from a former factory into the main Kader complex. Faced with continuing price rises across the board, we have taken some difficult decisions but will continue to produce top quality products to meet the increasing demands of railway modellers”

You’ll notice the list bellow is a fairly modest one. Bachmann have admitted and acknowledged that they needed to focus on consolidating all it’s previously proposed releases – Some of which we are still waiting to see working prototypes of – The OO Class 90, proposed last year for example. Nevertheless there are some nice additions to the range which will no doubt get modelers excited. Under the Graham Farish N Gauge brand, Bachmann have added a Class 20 twin pack in Hunslet Weed Killer livery. They’ve also released the accompanying adapted MK1’s and TTA tankers (sold separately) to complete the full formation. 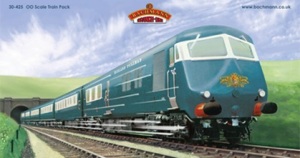 Bachmann have also announced a special edition version of it’s ever popular Midland Pullman train. The set will also feature a pack of stewards and train crew figures, reproduction menu card and a first edition copy of the latest Blue Pullman book by Kevin Robertson. All marvelously presented in one of Bachmanns new artwork-print boxes. If it’s anything like the special edition Railway Children pack recently reviewed on IC82’s YouTube channel this will certainly be a sought after and impressive set.

Other highlights of the announcement include Ransomes & Rapier Steam Cranes, DCC J32s, a Freightliner Class 70 and a SouthWest Trains Class 350 Desiro. Damn and blast! Why won’t they do a First TransPennine version?!

For the definitive list of announcements (including the Scenecraft range) I thoroughly recommend a visit to this RMWeb post. It also features a full list of re-releases of existing items and details of where in the development process Bachmann are with their previous 2014 announcements!