It’s certain that Seymour, Bilbow and McGill took a lot of their influence from similar Charles Holden structures on the Central Line when designing White City. Some of Holden’s signature features and principles are still plain to see, including the boxy brick facade with the high sided ticket hall window. However the 1930’s art deco embellishments of comparable Holdens are starting to wane and the austerity of post-war Britain is showing through. The individual window panes are much larger and therefore there are less of them. This no doubt allows the maximum amount of light into the ticket hall below and means less electric lighting is needed. The sweeping curved shop fronts found at say Bounds Green (009) have been abandoned for simplistic square office blocks. You can see the very transition from 1930’s art deco grandeur to 1950’s brutalism right here at White City. The powers of the time obviously agreed as the design won a Festival of Britain award.

Though a handful of station on the Underground have right-hand running, White City is the only above ground station to feature this non-standard arrangement. This dates back to the former Wood Lane loop on which the station is built, which allowed westbound terminating trains to run round and head back east without stopping for the driver to change ends. 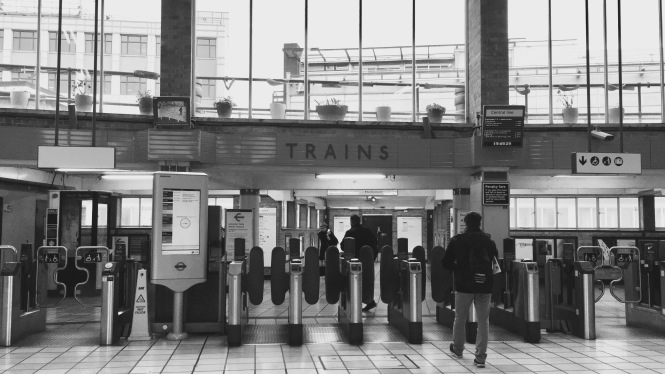