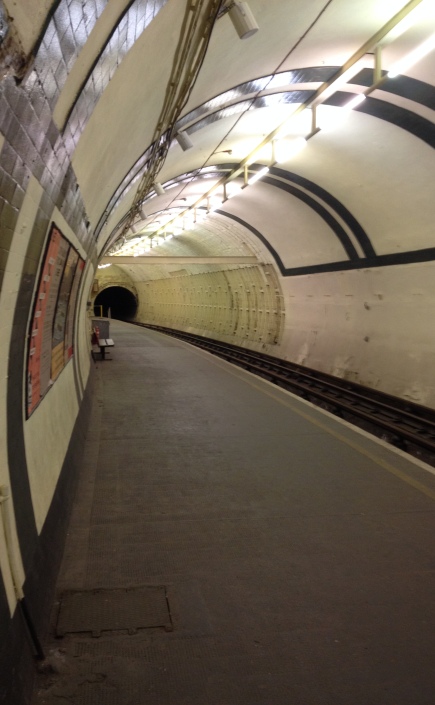 Lunacy of the highest order. Nothing about this has been thought through. I'm suprised Boris didn't think of it. gu.com/p/45gkd/stw

As you can see, this didn’t really strike a chord with me. So as a response – here’s why:

As I discovered when I visited Aldwych Station a year ago, The former Piccadilly line between Holborn and The Strand originally closed as it was deemed uneconomically viable to refurbish the lifts (to the tune of £3m in 1994 money) to cater for the low patronage of 450 passengers per day. Presumably this stance would have to be reversed if the Cycle UnderLine were to provide access to the street at Aldwych, with additional lifts being required at Holborn. Even though I’m sure it would be hoped that more than 450 people per day use the stretch as a cycle lane, this still doesn’t warrant such a big expenditure just to remove cyclists from 0.3 miles of Kingway (the road above). As the whole point of cycling in London is to beat the traffic, and considering that you can walk from Holborn to Aldwych in 6 minutes, I’m not convinced this would save anyone any time. If anything it would make your journey longer.

This video really annoys me – Firstly because an example taxi journey of Green Park – Aldwych is somehow being compared with a cycle journey between the Isle of Dogs – Greenwich. The later of which is 1.2 miles shorter. Secondly – YOU’RE NOT SUPPOSED TO CYCLE IN THE GREENWICH FOOT TUNNEL!

The stretch of tunnel from Green Park to somewhere underneath Strand, East of Charing Cross, was part of The Jubilee Line up until 1999 when the line was extended towards Stratford. Again, it was considered a waste of money to keep this short branch open when Charing Cross was already being adequately served by the Bakerloo Line in a similar direction. Again I’m not sure that a cycle-bypass is really needed here, as you could easily use The Mall and Green Park to safely avoid the bulk of the area’s traffic. Further more, I’m not convinced using the entire proposed tunnel as a continuous route (Holborn – Green Park) would be an effective use of time. If you’re a serious cyclist, you’d just stay at street level on Shaftesbury Ave, and if you’re a novice – well you’d just take the Piccadilly Line and be there quicker.

OK, so this design is at least trying to think of ways to reuse our redundant underground spaces practically, it just isn’t a very well thought out idea. There’s nothing wrong with the concept of underground cycle lanes, in fact as blue-sky thoughts go it’s not half bad. The problem is it’s being applied to a mismatch of routes and tunnels that weren’t even very useful as railways. For this scheme to work you’d have to construct a completely new route, east-west or north-south (A Cycle Crossrail if you will) to really provide congestion relief and a safer, quicker passage for cyclists. With London’s subterranean space now at such a premium, to make any new tunnelling cost effective it really needs to be allocated to high-capacity railway – most likely to a National Rail standard. Look at the proposed Crossrail 2 route. This was originally to be a Tube line from Epping – Wimbledon, but to make the most of any proposed new tunnelling it will now be linked to Suburban National Rail Lines to maximise every last drop of capacity. With all the best will in the world a brand new cycle-only tunnel would not be used as much as a railway or tube line, let alone one that doesn’t connect anywhere useful like Gensler’s.

The question also has to be raised, how would the conversion to cycle lane, the additional lifts and tunnelling be paid for? And how are costs recouped once constructed? You can’t charge cyclists for it’s use. They’d just stay on the streets above if you did. You’d have to look at some kind of commercial sponsorship or combined commercial use as the video suggests. Are shops with cycle-only footfall viable? I don’t know. Maybe in a utopian society, but in London probably not. So then you’d have to open access to pedestrians… and the whole scheme is closer and closer to circling the drain.

The idea of recycling space is still nonetheless a good one, so how can we use these redundant spaces more practically? Excellent question.

Seeing as both sets of tunnels are still electrified and maintained by London Underground it seems fairly sensible to keep them as railways and try to improve their fortunes. From the early 20th century it was suggested that the Aldwych branch should be extended southwards to Waterloo and beyond. I’ve suggested this myself before as it would alleviate congestion on the Northern Line, and provide a new north-south tube tunnel – of which there aren’t enough. 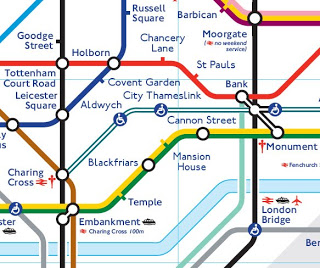 As for the Charing Cross tunnels, these have long been mooted as a potential DLR extension from Bank to free up capacity on the Central Line (known as the Horizon study).

Both lovely ideas, but again not without their downfalls: To extend the Piccadilly Line southwards would require an expensive rebuild of Holborn. As London Reconnections point out extending the DLR west would create all sorts of capacity problems at Bank not to mention overuse on the rest of the Dockland’s Network as well. Nevertheless, although more expensive, both ideas above would provide far more lasting capacity per £ over Gensler’s UnderLine.

I however think there’s a better way to recycle the tunnels. Make them part of the London Transport Museum. This was recently done at New York’s equivalent where the platform levels are able to showcase rolling stock and past station architecture. You could use the remaining tunnels for exhibits, cafe/retail spaces or even heritage runs of old stock!